The Meaco Low Energy 12L can't quite match the outstanding 20L version. The lower extraction rate - especially at cooler temperatures - and single fan speed are two of the main drawbacks. It's still an excellent dehumidifier for small homes though, as long as they are heated.

The Meaco 12L Low Energy is the little sibling of our #1 pick – the Meaco 20L Low Energy. It’s a refrigerant (compressor) dehumidifier with many of the same features as the 20L version, but with a cheaper price and compact design.

Despite the lower maximum extraction rate, it has most of the features you expect from Meaco’s Platinum range. These include reduced energy consumption, optional HEPA filter and an air purification mode.

How does is compare to other dehumidifiers in this price range though? And can it match the high standards set by the 20L version? Keep reading our Meaco 12L Low Energy review to find out.

Note: This review is of the 12L Low Energy that was available mid-2018. Meaco released an updated model during Winter 2018 that’s slightly quieter and more energy efficient, but most of the features are the same. 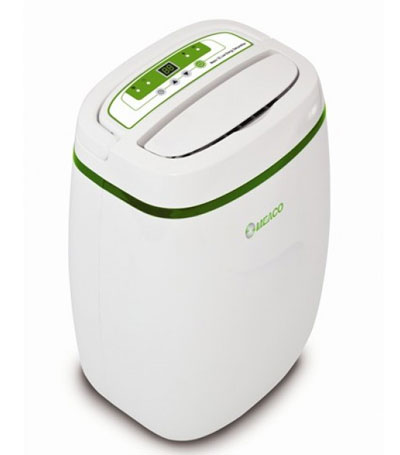 The Low Energy 12L is part of Meaco’s popular Platinum range. It has a similar appearance to other models in this series, with a curved white exterior that’s offset by small sections of green. While it’s not the most innovative design, it’s simple and unobtrusive, so should look fine in any home.

There is a simple digital display at the top of the device. This shows the current room humidity and allows you to set a target humidity (more on this in a moment). Unlike dehumidifiers with complex control panels, the Meaco only has four buttons.

When it comes to size, the 12L Low Energy is slightly below average compared to other refrigerant dehumidifiers. The dimensions of 23.5 x 48.5 x 24.8 cm also mean it’s considerably smaller than the Low Energy 20L – and around 4kg lighter too.

Maintenance is straightforward, as you really only need to keep the filter clean. Meaco recommends vacuuming this at least every two weeks for optimum performance. There are some other minor maintenance tasks (check the manual), but they shouldn’t take much time.

Speaking of filters, the Meaco 12L dehumidifier allows you to use an optional HEPA filter to remove allergens and other particles from the air. This is great for people with allergies – although the HEPA filters are not washable so you’ll need to purchase replacements. You can even run the Low Energy 12L as just an air purifier, which could be useful during the spring and summer when mould is less of a problem.

There’s also a louvre at the top of the device. This lets you adjust where you would like air to go once it’s expelled from the machine. 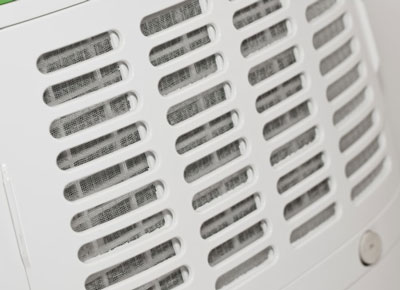 The Meaco 12L Low Energy has a 2.5 litre water tank. This is around average for a home dehumidifier, but much smaller than the 6 litre tank found on the 20L Low Energy.

Still, the lower extraction rates of this model mean a 2.5 litre tank should enough for most households. There’s also a continuous drainage mode, but you’ll need to purchase the hose separately.

As you would expect from a modern dehumidifier, a float in the tank automatically switches the machine off when full. The tank also has a cover to prevent spilling.

The Low Energy 12L is one of the more portable refrigerant dehumidifiers. It’s nowhere near as thin as the EcoAir DC202, but the 9.5kg weight makes it lighter than the majority of models in this category. It also has a carry handle.

With that said, it can’t match the lightweight and compact design of a desiccant dehumidifier. Most desiccant models are around 6-7kg with similar size water tanks. This isn’t a complaint about the 12L Low Energy, but a general downside of a compressor dehumidifier.

One of the best things about the Platinum series is how quickly it pulls water from the air. While the stated 12L per day extraction rate requires a 30 degrees Celsius temperature and 80% relative humidity, you can expect the Meaco to rapidly remove moisture in typical UK house conditions. There’s also a laundry mode when you need to dry clothes quickly.

Here’s a quick overview of the extraction rates depending on temperature and relative humidity:

It’s important to have realistic expectations though. While the Meaco Low Energy 12L excels in warm rooms, it’s much less effective as the temperature drops.

At 15 degrees Celsius and 60% relative humidity, for example, it can only extract a maximum of 1.44 litres per day. This is better than nothing, but there is a sharp drop-off in efficiency below 20 degrees Celsius and 60% humidity. If you want to reduce the humidity in an unheated room, conservatory or garage, a desiccant machine may be the better choice.

You may also want to consider the Meaco Low Energy 20L for cooler environments, as the higher maximum extraction rate allows it to remove more moisture than the 12L model at lower temperatures (4.8 litres per day at 15 degrees Celsius and 60% humidity, compared to 1.44 litres for the 12L Low Energy).

Another drawback is that there’s also only one fan speed. While this isn’t a major problem, it can be useful to have multiple speeds depending on the humidity and your noise tolerance.

The Meaco 12L Low Energy is designed for flats, bungalows or houses with up to three bedrooms. It does an excellent job at reducing humidity in homes of this size.

If you have a larger house, go for the more powerful Meaco 20L Low Energy instead.

With a maximum noise output of 44dB, the 12L Low Energy is  average for a refrigerant model. It’s not the quietest on the market – we’ve reviewed models with less than 40dB noise output, including the MeacoDry ABC – but it’s far from the loudest either.

Even so, if you want to run a dehumidifier while watching TV or listening to the radio, the 12L Low Energy may not be the right option. It’s also a good idea to place it on a carpet or rug, rather than a hard floor, to reduce noise.

As you would expect from a dehumidifier called “Low Energy,” this model is one of the most energy efficient on the market. According to Meaco, it uses an average of 165W at 20 degrees Celsius and 60% relative humidity, so it’ll cost less to run than many competing models.

The machine also includes Meaco’s Control Logic system. This automatically switches to “Fan” mode once the target humidity has been reached, then checks every 30-minutes to see whether the relative humidity has risen.

With the rising cost of electricity in the UK, energy efficiency isn’t something that you can afford to overlook – especially you plan to run the dehumidifier continuously.

Meaco has included an automatic restart function with this model. If the device loses power, it’ll automatically switch back on and use its previous settings once power has been restored. This is great if you’re using the dehumidifier in a boat or empty home.

The control panel is simple and intuitive to use. You should always read the manual before you start using a dehumidifier, but it won’t take hours to learn how to use the various features.

In the centre of the panel is a small digital display. This shows the current relative humidity. Below the display are “up” and “down” buttons for adjusting the target humidity from 30-80% in steps of 5%, so you have control over what the dehumidifier is trying to achieve. A target of 50-55% is a good start for preventing mould, but for killing dust mites you may want to go below 50%.

The control panel also has a button for setting a 1-24 hour off-timer and several indicator lights. If you have children, the inclusion of a child lock helps stop your settings being changed.

The Meaco 12L Low Energy dehumidifier is cheaper than its bigger sibling (the 20L model), but is still a relatively expensive dehumidifier. If you want to use the optional HEPA filter, these need to be purchased separately (only one is included with the machine).

Despite the high price, we think the combination of performance, air purification mode and easy-to-use design mean it still provides value for money. There are certainly cheaper 12L options though.

Don’t forget the energy savings of using this model compared to other 12L dehumidifiers. With an average consumption of just 165W, the savings can add up over time.

Tip: Interested in learning more about Meaco dehumidifiers? Click here for our in-depth guide to the company’s best models.

Can you run this model in the bathroom?

The Meaco Low Energy 12L is not splash proof or IP rated, so it’s definitely not suitable for use in a bathroom when you’re having a bath or shower. It’s capable of reducing the humidity in more than one room though, so you could run it outside the bathroom with the door open once you’re finished.

How long does it take to reduce the humidity in a room?

This model does a great job at reducing humidity in warm conditions. It’s impossible to estimate the time taken, however, as this depends on the room size, humidity level, temperature and sources of moisture.

For more information about how long to run a dehumidifier for, check out our guide here.

Where can you buy it?

The Low Energy series is available from many online retailers, including Argos, Amazon, John Lewis, Currys and Tesco. You can also buy it directly from the Meaco website.

If you’re looking for a second-hand model, eBay is your best bet. Just make sure you know the dehumidifier’s condition and whether it comes with extras, such as the instructions and HEPA filter. Buying second hand may also affect the warranty.

Should you buy the Low Energy 12L or the 20L version though? If you have a large house, the 20L version is the obvious choice, as it has a considerably higher extraction rate. The 20L version also does a better job of extracting water at lower temperatures (below 15 degrees Celsius).

With that said, the 12L version is cheaper, uses less energy and has a more compact design. It also removes plenty of moisture in warm conditions. So, if you need a dehumidifier for a heated flat or small home, it’s a great choice.

There are better options for cooler conditions though. The drop in extraction rates is dramatic when you reach 15 degrees Celsius, so we can’t recommend this model for garages, conservatories or unheated rooms.

Why Isn't My Dehumidifier Collecting Water?

ChooseDehumidifier.co.uk is a participant in the Amazon EU Associates Programme, an affiliate advertising programme designed to provide a means for sites to earn advertising fees by advertising and linking to Amazon.co.uk.